As France winds down its activities in Mali, the Government in Mali has indicated that the security vacuum will be filled by the Wagner group – a Russian mercenary outfit that has been active in countries like Libya and Syria, where it has supported the Government of Bashar Al-Assad and the forces of Libyan General Khalifa Haftar.

The Wagner groups activities have also been evident in the Ukraine where their activities were in close co-operation with uniformed Russian soldiers.

Germany has warned against the signing of any security operation between the Malian Government and the Wagner group, and the country has thousands of French and up to 1,000 Bundeswehr troops which are stationed to drive out and counter Islamist extremists.

The Times (of London) reported that French sources had suggested a potential contract deal of $10.7 million a month between the Government of Mali and the Wagner Group, which will be used to train local troops and ensure the safety and security of politicians and senior figures in the country.

There has been a history of Mali’s co-operation with Russia in the past when the country’s first president, Modibo Keita, turned in 1961 to the Soviet Union to equip the Malian army as the French withdrew as an occupying force. This security co-operation continued until the 1990’s and the country is in the grip of an Islamist insurgency that has seen Al-Qaeda affiliates such as the Jamaat Nusrat al-Islam wal-Muslimin, seek to target military and civilian groups in the country. More recently, the Taliban takeover of Afghanistan has re-energised such groups where the leader of this Al-Qaeda affiliate, Iyad ag Ghaly, congratulated the Taliban in their takeover of Afghanistan.

“If Mali’s government makes such agreements with Russia, it goes against everything that Germany, France, the EU and the UN have undertaken in Mali for 8 years”. 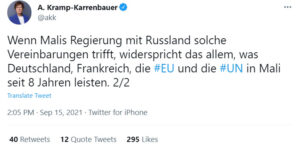 The real issue remains whether the Green Party and left leaning political groups in Germany would support ongoing engagement and military support for the Malian Government whilst Wagner mercenaries enter and start to provide security in-country.