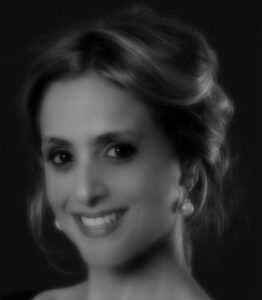 Aya Burweila is the Founder of Code on the Road, a BBC Expert Woman in Terrorism and Radicalization and a Visiting Lecturer at the Hellenic National Defence College. Prior to establishing Code on the Road, she was the head of Research & Public Policy at Solidarity Now, an Athens-based NGO active nation-wide in the field of human rights.

Born in Benghazi, Libya, she holds a certificate in Building Capacities on Arms Control in the MENA Region from the Geneva Centre for Security Policy, certificates in Conflict Analysis and Interfaith Conflict Resolution from the United States Institute of Peace, a certificate in Terrorism Studies from the University of St. Andrews, an M.A. in International Relations and Affairs from the University of Indianapolis, and a B.A. in Political Science from the University of La Verne. She has participated in projects and field visits in camps in Germany, Italy, Lebanon and in Greece, where she also worked at the Leros island hotspot. Aya is also a Senior Adviser at the Research Institute for European and American Studies where for ten years, she was an analyst specializing in extremism and conflict in North Africa, Europe, and the Balkans.

Aya’s work on integration, conflict and extremism has been published in a wide range of journals and platforms such as the International Journal of Intelligence and Counter Intelligence, European Eye on Radicalization, the Oxford Law Society Journal, the China U.S. Focus Journal, The Jerusalem Journal of Near East Affairs and the Centre for Peace and Reconciliation Studies, as well as mainstream publications like the Huffington Post. Aya is also the author of the EU commissioned “Greece National Report 2018: Migrant and Youth Social Inclusion Through Entrepreneurship (MY-SITE)” for the People for Change Foundation.

She has been quoted by Time Magazine, Jane’s Military Intelligence Review, Voice of America, the Washington Times, the Guardian, Protothema, Jeune Afrique and the Athens News, among other publications. In 2019, she was the winner of the Harvard Arab Alumni Network’s 3arbi Impact Initiative.